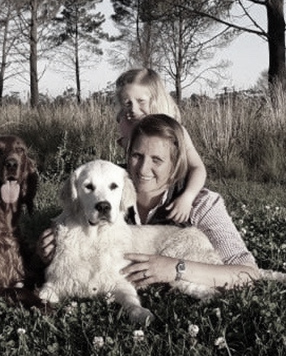 Marinette Teeling completed her human physiotherapy degree at Stellenbosch. Whilst working abroad she started and completed her MS degree in animal Physiotherapy at the University of Queensland, Australia. She had a busy animal practise in Cape Town and served on the APGSA committee for a several years managing the Education portfolio.


She loves lecturing which explains her enthusiasm when asked to serve at Equine-Librium College in 2012. In her words: “we want to qualify veterinary physiotherapists with a superb understanding of the animals they treat and a sound set of practical treatment skills, to ensure the profession’s name is held high and to show the true benefit of physiotherapy in the animal field”. She has lectured at various Veterinary Congresses in South Africa and internationally. She enjoys an active lifestyle with her husband, daughter and 5 dogs. Her other passion is working and showing her Golden Retrievers and Irish Setters. 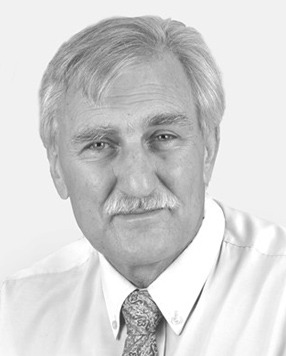 Professor Sybrand vd Berg obtained his degree in Veterinary Science in 1969 where after he completed his BVSc(Hon) in 1981, MMedVet(Surg) in 1983, MMedVet(Rad) in 1895 and finally his DVSc in 1996 at the University of Pretoria, Onderstepoort.

After graduation, Prof Sybrand spent some time in private practice, where he enjoyed the challenges presented to him. He then returned to Onderstepoort where he became a senior lecturer and later head of the Department of Surgery. After a well accomplished career in the educational field of Veterinary Science, he returned to private practice for a few years. In 2012 Pof Sybrand became the principal of Equine-Librium College where he still plays an integral part in the lecturing of students. Prof Sybrand has a passion for carrying over knowledge and moulding young minds.

During his career, Prof Sybrand served on various positions of different professional bodies, namely the SAVC, SAVA, Equine Practitioners Group of SA and the South African Farrier’s Association. He also took part in the writing of various publications. 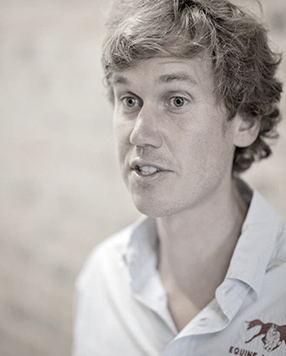 Dr Tom graduated from Onderstepoort in 2009 where he studied Veterinary Science. After that he spent some time working at an equine hospital in Natal. Dr Tom Joined the Equine-Librium Team in 2016 as a lecturer and veterinarian.

Currently Dr Tom is the vice principle at Equine-Librium where he spends his time moulding young minds and running a lameness clinic on the College grounds. 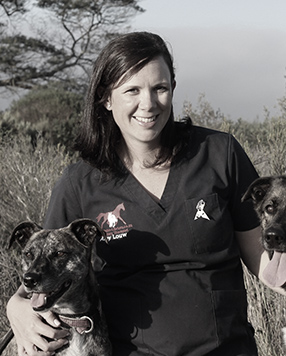 Amy graduated from UCT with an honours degree in Human Physiotherapy in 2006. She always knew she wanted to go into the field of animal physiotherapy and did every available post graduate course through the Animal Physiotherapy Group of South Africa. In 2010 she completed her Equine APDL 2 through the APGSA and started her own equine practice in KwaZulu Natal, where she saw a wide range of equine patients. She continued to work in the human field and was therefore able to treat both horse and rider. In 2013 she moved to Cape Town to complete a business diploma through the UCT GSB, she continued to treat animals in her spare time. In 2015 Amy completed further training in canine physiotherapy, through a program called PACE, and started to work for Pet Wellness Worx. She gained valuable hands on experience at PWW in all areas of canine rehabilitation. In 2017 Amy became a member of the lecture staff at Equine-Librium college, teaching theoretical and practical components of the veterinary physiotherapy curriculum. She continues to see patients in the Equine-Librium clinic.

She is extremely passionate about the veterinary rehabilitation field and is constantly striving to improve her skills and knowledge.

Amy lives in Plettenberg Bay with her husband, son, and two rescues, Harvey and Rogue. Outside of work, she enjoys spending time with her family and in nature. 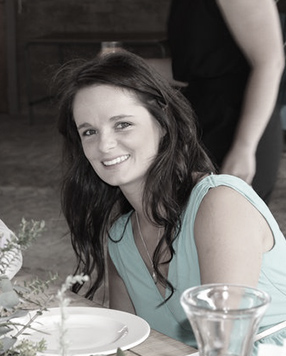 Erane was born and raised on a beautiful farm in Matatiele in Kwazulu-Natal. Her passion and love for both equine and canine stems from her youth days. (She was fortunate to have grown up on a farm where owning more than one horse or dog was never an issue). She played polo over weekends and competed in all equine disciplines; show jumping, dressage and eventing.

She graduated from Equine-Librium in 2014 winning the award for student of the year and top researcher in her class. She spent the year thereafter working in Cape Town at Cape Animal Physiotherapy under the guidance of Christelle van Wyk, gaining tremendous skills. She has been with Equine-librium since 2015 as a therapist and lecturer and is very involved with practical stations with the students. Erane is driven and passionate, knowledgeable, and always striving to provide the best to her students and clients.

Erané worked in Cape Town for the very well-known practice, Cape Animal Physiotherapy, under the guidance of Christelle van Wyk, (Erané Jacobs has been a trusted and valuable employee since January 2015. I have known Erané for the past 4 years prior to her employment at Cape Animal Physiotherapy as a student at Equine Librium College and I had the privilege to watch her grow tremendously in her skills and mentally over those 4 years into an extremely confident and talented Veterinary Therapist. Erané is a goal-orientated, independent person with a high standard of work ethic. She has also learnt to deal with difficult clients and professionals over the past few months.) Christelle van Wyk 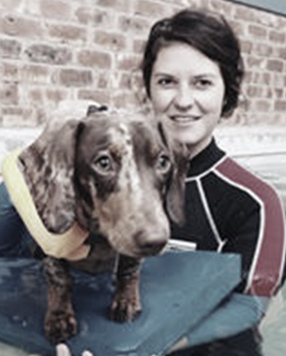 Growing up on a Boerperd stud farm, Danelle developed a deep love for the well-being of animals.

She developed a curiosity for understanding how the equine and canine body functions.  After 4 years of intensive studies at Equine-Librium college, she qualified with Distinction in 2016.

For the last 3 years she has been working as a veterinary Therapist and lecturer at Equine-Librium College. She is ever hungry to learn more and develop her skill and she puts great emphasis on both her clients’ and patients’ needs.

“I believe in precision in your work and in your skills to ensure your treatment plans are correct, but your patients’ emotional and physical wellbeing contribute to the efficacy of your treatment.” 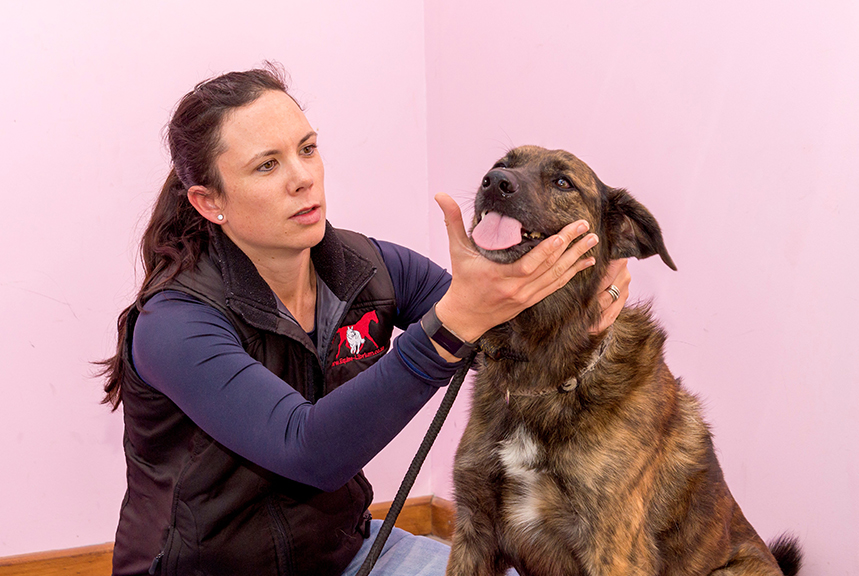 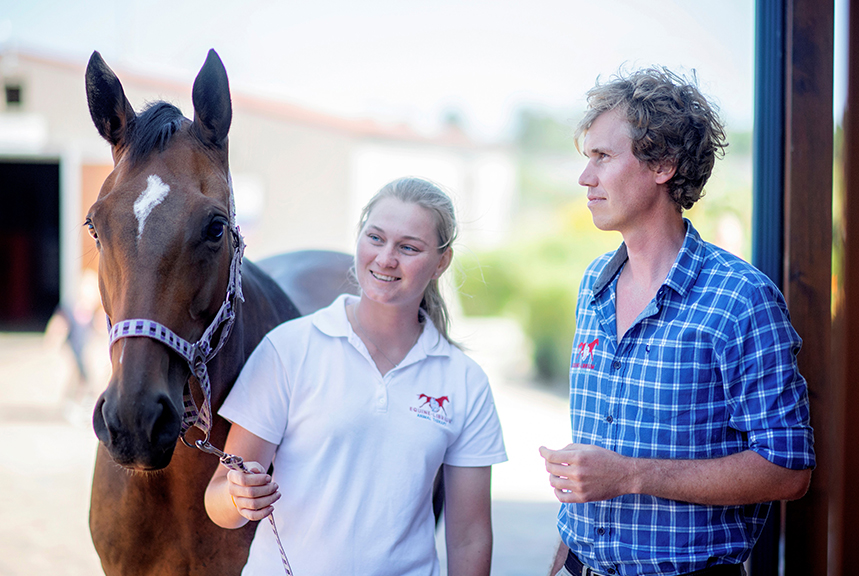 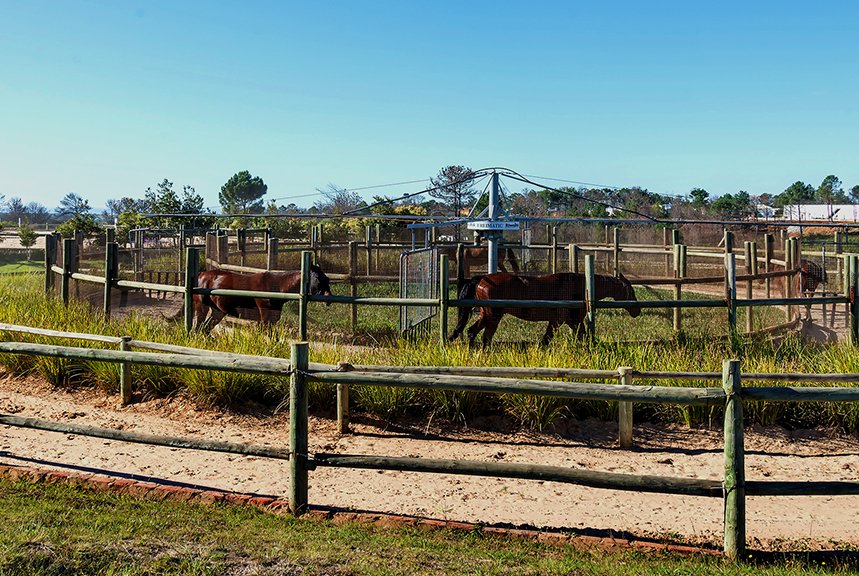